The Few, The Proud, The Bonkers

What is a streaker?  It’s someone willing to sacrifice their time, money and (quite likely) personal relationships to attend every Brazen Racing event in a calendar year.

We do not recommend people try to streak if it is going to cause them any amount of stress or anxiety.  We believe that the beauty of running and, especially running in Brazen Racing events, is the happiness and sense of community it brings.

It makes no sense to us that someone should be stressed out about not being able to make it to a race!  It also creates vicarious stress for us!

In short, we want you to be happy and we want to be happy, so if attempting to streak is making you unhappy, don't do it!

Near the end of 2010, we noticed that three people had registered for all 15 of our races that year. We thought that was pretty impressive and wanted to acknowledge their achievement.

We made up some shadow boxes with the medals of all races they ran that year and a small plaque. These were presented at the last race of the year.

By the end of 2011, despite adding several races to the calendar, we found that even more people managed to "streak". We decided to give them their own unique "streaker number" that would forever be theirs, along with a shirt that would only be available to streakers (and that included their number).

2012 saw even more streakers, as did the coming years.

We keep adding races and making it more difficult to streak, but people keep doing it anyway!

We no longer present the shadow boxes to streakers (this became financially impossible as the number of streakers each year swelled), but those successfully completing a streak continue to be acknowledged for their die-hard race attendance and they continue to receive their "streaker number" that is forever theirs.

What If The Race Is Too Tough For Me?

Some races, like the Double Dipsea, may prove to be too extreme for a potential streaker’s fitness.  Usually there will be an “early start” option to give extra time, but even with that, we do not want anyone pushing themselves in an unsafe manner for the sake of a streak.

Not every runner who starts is going to make it to the finish. If necessary, runners can often go as far as they can and then drop out at an aid station or turn around and return to the finish and inform timing of the drop-out.

Those who plan to start, but know they will probably not be able to make it the full distance, should inform the race director as early as possible.

Come meet each the runners that have earned their streaker status by completing every race within a calendar year! 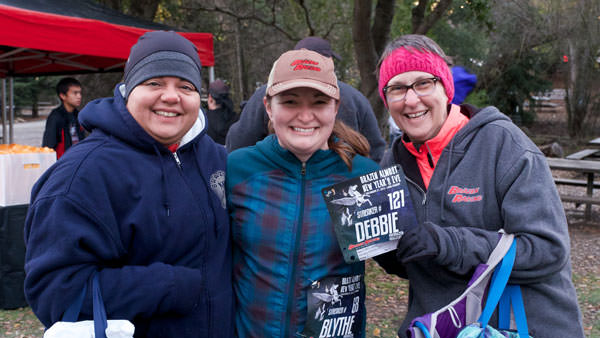 "We all have dreams. But in order to make dreams come into reality, it takes an awful lot of determination, dedication, self-discipline, and effort."
Jesse Owens